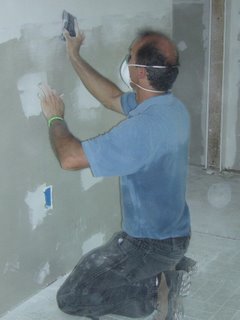 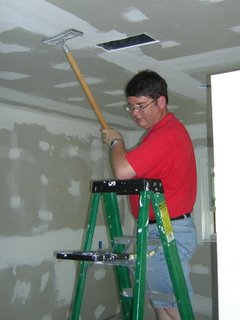 "We came. We saw. We sanded." The sheetrock crew sanded all day today and had good opportunity to interact with some of the neighbors. Listening to people tell their stories is an important part of the ministry here. Folks in this area all have stories that they need to tell. The Lagniappe crew told us the first day that it is more important to listen to people than to do any work. I thought "Yeah, yeah, I hear what you're saying, but when push comes to shove you really want the work done." No, there really is a need to listen to what people have been through with Katrina and what they are going through in trying to recover. Some of these people want to serve us, as a way to show appreciation, to help with the healing. It's difficult when you're here for a short period of time to not get caught up in the desire to try to build the most sheds or roof the most houses, instead of wanting to participate in what God is doing in people's lives. 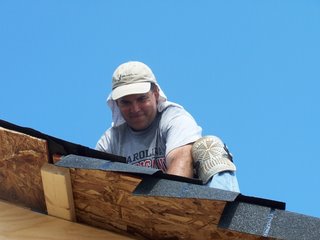 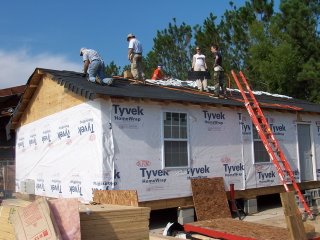 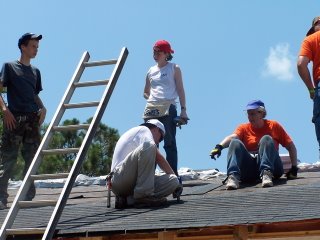 "Visualize the line. Feel the line. Do the line." This was the roofing crew's mantra as they lined up the shingles on the new bunkhouse. They were hard at work in the 95 degree heat and high humidity roofing the new bunkhouse. It was so hot on the roof that the crew could only work 30 minutes at a time, with a 30 minute break. You can imagine the temperature on the roof was quite a bit hotter than the air temperature. By the afternoon, the tar on the back of the shingles would melt to the roof as soon as they were placed on the roof. One young man had duct tape on his shoes that started to melt. Although progress was slower than expected in the morning, a pnuematic nail gun was a huge boost in the afternoon shift. The bunkhouse is now done, as is the roofing crew. 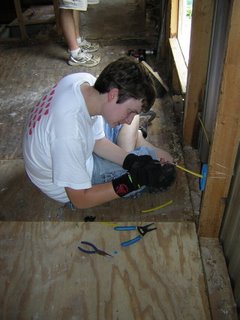 The electrical crew finally completed Mr. H's mobile home wiring about noon Thursday. With a bit of anxiety, Mr. H flipped the main breaker. No smoke or fire, a good sign. We took the fan Mr. H had been running on a cord running from outside and plugged it into the wall. What a great feeling to see that fan come on! Megan and Ryan took Jay's circuit tester and tested each of the sockets in the mobile home. Every one worked except for the GFI outlets. After a few minutes of head scratching, Jay realized we needed to reset the circuit and everything worked great. Mr. H was very pleased and asked Jay to come back anytime and be his electrical contractor. Later the crew started work at another house that needed complete electrical work. This house is about 400 yards from the Gulf and had been completely leveled by Katrina. Jay walked through the whole (new) house with (another) Mr. H, listening to what he wanted and talking with him about everything that was needed. This will be a massive job. There is no way the crew can complete the job before we leave on Saturday, but there will be a start and a handoff to the next crew to come in. It is quite a contrast between this house and the one just completed. Everyone here has been affected by the storm, both rich and poor.

Please pray for good rest and continued safety. One more day of work and the team is quite tired. Attitudes have been good and grace has been abundant. We are tired, but encouraged with what God has done in us and through us.

Way to go!!! What mighty things the Lord is working through you all. ( imagine, shingles melting on the roof...hot, hot, hot.....) We pray for you everyday.
In Christ,

Many thanks for making us a part of the team too! We see you putting your heads, hearts & feet into practice each day, being that "living sacrifice" (Romans 12:1)in the midst of trying circumstances. May your efforts be greatly multiplied, blessings abounding to and for all lives touched this week. Have a safe trip home! Mrs. M