The Chicken Truck of My Heart 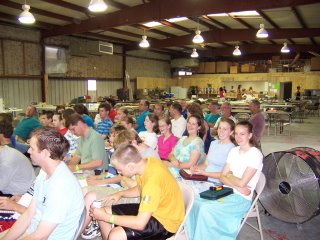 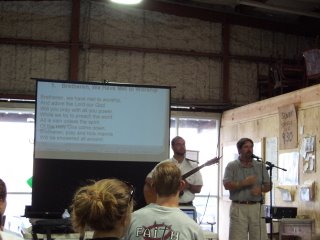 Today has been a great day to worship the Lord here at Lagniappe. Many of us awoke early as our bodies are still on Eastern Time. It is a bright and sunny day. Breakfast was kind of on your own - whatever was available in the kitchen. Some folks had cereal, others grits and oranges. For the early risers (~ 6AM) there were a few Dunkin' Donuts; later, someone had some leftover pizza (Breakfast of Champions). The early folks had the best selection, something Dr. Mike informed us was called optimal foraging (which we quickly dubbed "OF", for short).

Later in the morning we had a worship service here in the hall, with Jean preaching. The sermon text was from Genesis 6:5 and Isaiah 64:6. Jean told the story of a tractor trailer load of frozen chicken that had been donated to Lagniappe in the last few weeks. The truck was parked in the back of the compound and kept cold by a diesel generator. Unfortunately, the generator started to fail without the staff realizing it and the chicken was completely spoiled. They noticed it first when they could smell it through the closed trailer. They had to clean out the trailer and tried all sorts of things to make the job more "palatable." Jean used the illustration to talk about the "chicken trucks of our hearts", full of rottenness and putrid filth that we try to hide by freezing it or keeping the door shut. He used the opportunity to talk about the two-part Gospel - Christ dying for my sin and giving His righteous to my account. He challenged us not to try and manage our sin by pretending that we were OK, but to admit that we're not OK and to be OK with that (OK, too many "OK"s in that one). Jean wanted us to see Jesus as the lover of people who are filthy, wretched and not OK. What a freeing bit of doctrine!

The afternoon is pretty laid back - we plan to tour the coastal area to get a view of the devastation as well as take the obligatory trip to Wal-Mart. We have a briefing tonight after dinner on the schedule for the week.

Please pray for stamina in the heat - with what little we did today we have seen how it can drain you.