It's Worse Than You Think 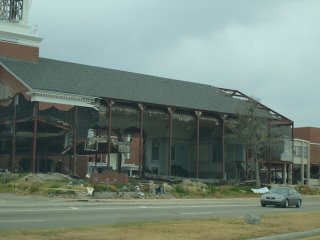 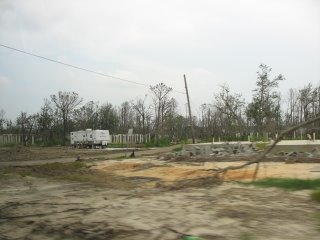 The team went out this afternoon after lunch to see first hand what happened with Hurricane Katrina. It's been nine months since the devastation and it's almost like nothing has been done in the reconstruction. We're sure it was worse right after the hurricane, but on street after street, where there used to be house after house, there is now nothing. Mostly there are just foundations or concrete slabs where whole neighborhoods once stood. Occasionally you will see a few pilings or the shell of a house without one or two of its walls. Trailers...there are trailers all over, some travel trailers, some FEMA trailers, some tents. It's amazing that people could basically live for eight or nine months in these conditions. We are so thankful for God's provision for us.

Tomorrow is a new (aka different) day. The plan is for us to work on finishing a new bunkhouse here on the Lagniappe "campus". By Thursday there are supposed to be 259 volunteers here and there is not enough space to house them. This is the most people that Lagniappe has had in a single week. Bill worked the afternoon with a crew that framed the whole bunkhouse. Tomorrow will be electrical rough-in and joists and trusses for the roof. If the bunkhouse is done in time, it will not be a second too soon. Hopefully we'll have some pictures of the bunkhouse work tomorrow. The bunkhouse is not what we expected to do when we arrived, but it's obviously what God wants. Our hope is in making His wants, our wants.