I have to admit, as of last night's post I thought there was no chance that the new bunkhouse would be completed enough for people to sleep in it tonight. Well, when we returned from dinner (we traveled to Gulfport for an all-you-can-eat buffet - tasty!) about 9:50, the folks were putting the finishing touches on the insulation and there were air mattresses on many of the bunk beds. Jay and Ron still have to wire one of the smoke detectors and hang the overhead lights, but they tell us that should be done in an hour or so. God has done amazing things through this team and the other folks helping on the bunkhouse. 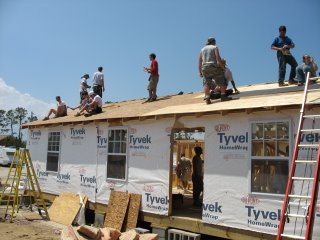 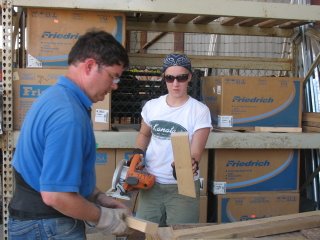 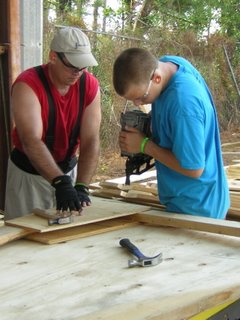 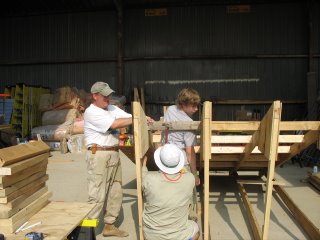 Everyone worked so hard on the bunkhouse today. It was all we did - roof trusses, electrical work, cleaning, you name it and the team pitched in to provide a place for more volunteers to sleep in (relative) comfort. Many folks did things over the last few days that they never thought they would/could do. It has been a stretching experience. Folks have sawn, hammered, run electrical wiring, built a roof, put on tar paper... The team leaders have been great with those of us that need a little instruction. It's such a blessing to have folks that know the technical details of what we're doing. 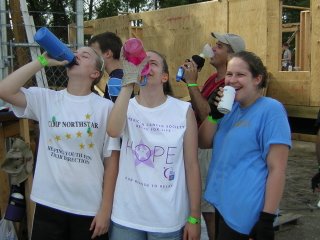 Today was extremely hot! It was definitely the hottest yet. Sarah and Kristin were superb in their roles as our little mermaids (the folks responsible for ensuring that we all hydrate as we should). We required so much water today that Anna joined the mermaid team to prod everyone to drink more. 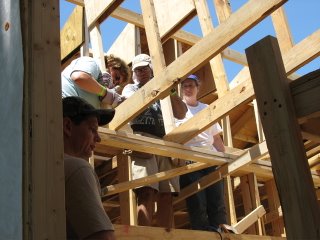 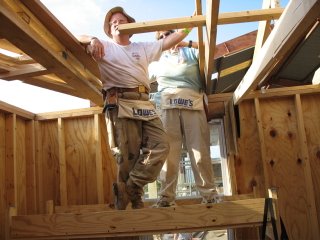 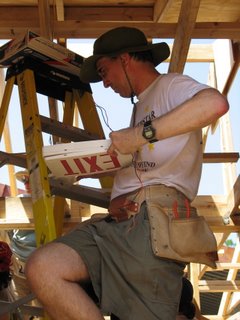 Folks were in and on the roof all day long. Bill, Mike, Rich, Lisa and Gwen were warriors. Trusses here, trusses there, trusses everywhere. Folks from other teams (churches) came in to help with the trusses and roofing as well. There is a group of three high school young men from Atlanta that have been a big help with the roof work. Rich has dubbed them "The Georgia Boyz." The bunk beds that the team built several days ago have gotten a quality control test by being used as scaffolding to put up the roof trusses. Hopefully, none will collapse on the folks using them tonight. Jay and Ron had the electrical team charged (pun intended) and wired the whole bunkhouse (minus three or four wires) today.

Tomorrow promises to be another busy day. The drywall team will finally get to put up some drywall at someone's house. The shed team will surely be hot - they are scheduled to shingle the new bunkhouse. The electrical team will finish the wiring at Mr. H's mobile home and then off to another assignment. At least those are the plans...we are definitely flexible. None of us expected to build a bunkhouse when we arrived. Again, God had different ideas, and I can say that people have had the best attitudes about what God has in mind for us. Enough for this evening. It's late and we need an early start tomorrow. Thanks again for praying for us. Pray that we would be honestly loving with each other.