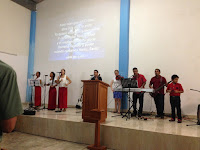 With church starting at 10:30 today, we had breakfast around 8am this morning. Jeff and Gwen were so kind and made the team pancakes and bacon! It was an excellent, and delicious, treat, especially Ginger’s, which had M&M’s taken from the trail mix. Afterwards we had our devotional time from yesterday, and headed to the church, la iglesia. There was huge thunderstorm this morning, so while the day was much cooler, it was also about twice as humid (have we mentioned that we are in the wet season). When we arrived at the church the worship team was practicing, with our very own Megan playing the violin. We took our seats and were touched when we saw that a picture of our group with the words “God Bless You” was printed on the back of the bulletin. It really was super special to see what our time had meant to the congregation. Worship was filled with energy and joy, and we got to sing a few familiar songs in an unfamiliar language. 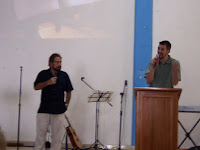 Nate got up and spoke to the congregation in Spanish, with Guillermo translating to English, it wasn’t long before Nate ran out of his planned Spanish script and they had to switch roles. Today’s sermon was on Jonah, and how God’s grace can run faster than we can from God. It was very powerful, and besides the occasional colloquialism and miscommunication, it was translated to Spanish very well.

After the sermon, we learned that the Church would be serving us lunch and then spending time with us…at the beach (la playa)! We fellowshipped at the church and then headed back to the hotel to get ready. We had a few tents set up with a table under them and had a feast 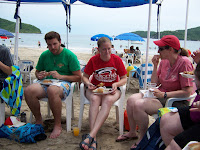 of pasta/tuna salad, bread, chicken (either pastor or barbeque), and rice. It was delicious, and afterwards we all floated like beached whales in the water. After some time had passed, one person brought a soccer ball into the water, and we played a giant game of catch. There was so much laughter and smiling, you would have thought that we were all old friends. The Lord has used this trip to build wonderful relationships between our team and the church, and we have already been invited to return.  It seems that this week has brought great healing to Jenny and Guillermo. A little bit later, a soccer game was started, that three of your favorite gringos, Ron, Tom, and Nathan G joined. The church members were very gracious with any shoddy footwork that we may have brought from the US. After a long afternoon of fun and fellowship, it was time to head back to the hotel, for blogging (since the puppet show is late tonight, your friendly neighborhood bloggers would prefer to get this post done early so we’re not up until the wee hours of the morning) and a little R&R. 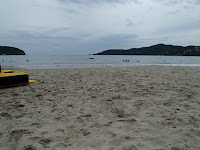 This evening there is a huge city wide event where there will be many talent shows, including the puppet show that Vida Nueva puts on.  There will be hundreds of people there tonight who will hear the gospel through their show.  Please be praying for the puppeteer team, and for those who hear the message.  We will report on the blog tomorrow!

(Did you find General Quackington yesterday?  He was quite enjoying himself today!  We're also still waiting for our yearly missionary joke from the peanut gallery!)

From Larry and Wanda Smith:

Larry and Wanda have been praying since the 2007 tragedy that God would send the Calvary Mission Team to Guiermo and Jennie. They are so proud of you and so glad you are there.

Love to all,
Larry and Wanda

It seems that there was a little old church out in the countryside: painted white and with a high steeple. One Sunday, the pastor noticed that his church needed painting. He checked out the Sunday ads and found a paint sale. The next day, he went into town and bought a gallon of white paint. He went back out to the church and began the job. He got done with the first side. It was looking great. But he noticed he had already used a half gallon. He didn’t want to run back in town and being the creative person that he was, he found a gallon of thinner in the shed out back, and began to thin his paint. It worked out great. He finished the remaining three sides with that last half gallon of paint. That night, it rained: it rained hard. The next morning when he stepped outside of the parsonage to admire his work, he saw that the first side was looking great, but that the paint on the other three sides had washed away. The pastor looked up in sky in anguish and cried out, “What shall I do?” A voice came back from the heavens saying, “Repaint, and thin no more!”

Since you are in Mexico and being exposed to other religions in a new way, here's a guide for you as you try to sort out the theology of it all:

HOW MANY PEOPLE DOES IT TAKE TO CHANGE A LIGHT BULB ?

Charismatic : Only 1 Hands are already in the air.
Pentecostal : 10 One to change the bulb, and nine to pray against the spirit of darkness.
Presbyterians : None. Lights will go on and off at predestined time
Roman Catholic: None - Candles only.
Baptists : At least 15. One to change the light bulb, and three committees to approve the change and decide who brings the potato salad and fried chicken.
Episcopalians: 3 One to call the electrician, one to mix the drinks and one to talk about how much better the old one was.
Mormons : 5 One man to change the bulb, and four wives to tell him how to do it.
Methodists : Undetermined Whether your light is bright, dull, or completely out, you are loved. You can be a light bulb, turnip bulb, or tulip bulb. Bring a bulb of your choice to the Sunday lighting service and a covered dish to pass.
Nazarene : 6 One woman to replace the bulb while five men review church lighting policy.
Lutherans : None Lutherans don't believe in change.
Amish : What's a light bulb?
Calvary Missions Team: 13. One to plan it 6 months in advance, 2 to raise funds, 5 to demo the room, 4 to repair it like new, and 1 to call Rich (apologies in advance. It's only a joke.)