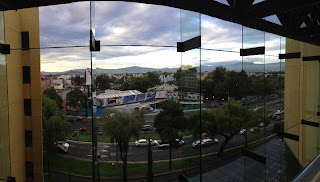 Our time in Mexico City was full of God’s evident mercies.  He provided a wonderful hotel for a reasonable price, an opportunity to get a glimpse of the culture, and a restful night of sleep after a harrowing day of travel.  This morning we were provided a buffet of typical Hispanic foods.  From Tom’s mouth, ‘This is what my childhood was like!’, as crumbs of his childhood fell back onto his plate.  We were also housed in 4 rooms side by side, so we felt comfortable worshiping in the hotel this morning before we left for the airport.  Tom led a discussion after worship on the devotion for the day from Psalm 121.  This whole trip has embodied this Psalm as we have seen God directing our path every step of the way. 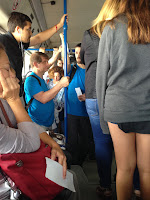 We arrived at the airport a little after noon where we checked our baggage and then headed to the food court.  Here God used our team shirts as a conversation starter for Nate W. to have a conversation with Mike, another short-term missionary headed to Peru, and Ulysses a homeless man who Mike had met in the airport while his flight was delayed.  This amazing story to come in a later blog! 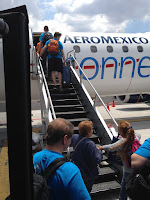 After lunch we made our way through security learning new Spanish words, such as the word for external hard drive, and pulling anything remotely suspicious from our bags to put in the bins.  After the great struggle, we made it to our gate where we met a team from Decatur, Illinois (where Lisa did her student teaching many years ago (but not too many! ;) ).  They are also embarking on a mission trip to another town in Mexico.  We listened carefully for our plane to be called, when we learned that our gate had been changed, and then it was changed again.  Finally, we made it to our gate, where 3 other flights were also leaving.  We learned from another traveler, that this type of organization is normal for the Mexico City airport.  After making it past the gate check, we wandered down a maze of ramps where we were directed to buses that would taxi us to our plane, halfway across the airport.  Nate G. was super excited to learn that he would get to walk up the steps to his plane, a thrilling first time experience! 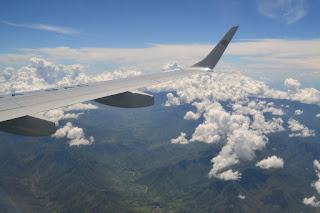 The flight to Zihuatanejo was a beautiful, scenic route.  We were all amazed by the mountain ranges and little towns nestled in the valleys.  We were greeted by Jennie and Guillermo and their daughter Amanda.  They shuttled us to the church where we were excited to see that members of the church had already started the work project!  We look forward to joining them tomorrow.  A church member had also prepared a hearty meal with homemade tortillas, carrots, potatoes and beef.  After we filled our bellies, washed it down with Cucumber-lemon water, and heard Guillermo’s testimony, we made it to our hotel, which is thankfully close to where we’ll be working! 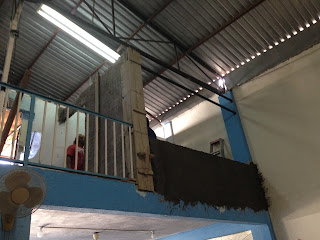 The evening comprised of settling into our rooms, a trip to Sam’s for water and food, and an evening worship service at the church. The pool has proven to be an invaluable asset as sticking our feet in the water while blogging, though a dangerous task, feels delightful.

Even though our trip was delayed and we’re getting started on work later than we though, God is good, all the time. We’re anxious to begin construction tomorrow and see the many things God wants to reveal to us this week. Get ready Zihuatanejo, Calvary Missions Team has arrived!