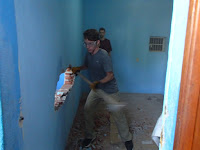 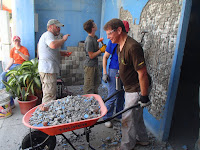 We are praising God that everything moves a little slower down here in Mexico. This morning we woke up to breakfast being served at 8 A.M, hosted by Jeff and Gwen. For those of you that haven’t been on a mission trip, that’s essentially sleeping in and still having time to watch Saturday morning cartoons. After we awakened our pallets with oatmeal, muffins, and hard boiled eggs, a team of five went ahead and walked to the church, where the construction is happening. The other eight took care of some logistical things at the hotel and waited patiently for Jennie and Guillermo to arrive. When the whole team arrived at the work site, we caught the vision, or rather, plan A. I can’t tell you how many total plans we ended up having, but I hope that you know your ABC’s. Basically we were tearing down one wall to make a double door front entrance, and tearing down another wall between the nursery and pastor’s office. The idea was that we would demo the concrete and then cut through the rebar with an arc welder. During this endeavor, we learned a couple of things: 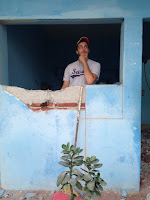 Around 12:30-1:00, we all sat down for a lunch break, once again provided by the church. Lentils, a variety of meats, and plantains were on the menu, along with a variety of beverages, including apple soda, and homemade tortillas. After a very long lunch break filled with wonderful exchanges of stories and laughs, we got back to work. The wall that was being torn down to make a double door was insulated with metal wire and Styrofoam that needed to be dug through to get to the rebar. Part of the team worked on that, while the others continued to go to town on the office/nursery wall, and carry the debris to a pile across the street. After working on that for just a few hours, it was time to go back to the hotel for a siesta. Some people swam, some people slept, and some people got caught up in the world of the NBA (it was me, Nathan G). Around 6:00, Guillermo and Jennie arrived to take us out to dinner, our first dining experience in downtown Zihuatanejo. 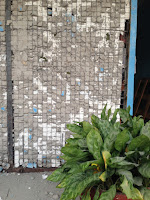 Satisfied with our final meal of the day, the crew rolled on back to the church, where rehearsal for this weekends’ series of puppet shows was happening. After a little bit of audience participation, the team gathered around to help pump up balloons, and then we were taught how to make balloon animals. While some of us found a new hobby twisting rubber air sacks into monkeys and koalas and swords (Oh my!), others affirmed that they shouldn’t quit their day jobs. After a long time of twisting, popping, and just making general fools of ourselves, we had ourselves a rag tag bunch of mutant balloon creatures, with a few normal ones, made by our demonstrator, as their leader. It was time to ride through the Zihuatanejo nightlife, which included a man breathing fire and dogs hanging out on roofs. Back at the hotel, we rendezvoused in the girls’ room to debrief the day, sing songs, and talk about today’s devotional. The topic was humility, and in a day where we were pushed physically and mentally, it was very relevant. 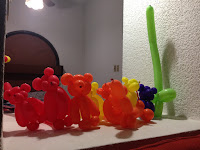 During the devotional, Jeff and Gwen shared with us their conversation with Guillermo and Jennie at the dinner table.  Evidently, the last team that they had down here to serve was in 2007, where one of the young team members was in a terrible accident on the beach and lost his life.  Prior to this event, they were hosting 10-15 teams a year.  Guillermo decided that they would no longer advertise for teams to come down, after being shaken by the tragic event.  Guillermo told God that if He would send a team down, he would allow it, but it had to be by God’s directing, and not by them advertising the service opportunity.  We are the first team to reach out to the Salinas family and come down since that tragic incident almost 10 years ago.  This trip has been such a blessing and a humbling experience to see God’s hand at work every step of the way.  Pray that we will be a blessing to the Salinas family while we are here, and that God will continue to use this opportunity to bring Him glory every step of the way.

(Added bonus:  There is more than one General Quackington picture today.  How many can you find?  Let us know in the comments!)

I love you guys and all that you are doing for others. Keep representing Christ so well in this world. And please stay safe.
Godspeed!
Aunt Sarah
P.S. I couldn't see any duckies in the pics because they were kind of tiny and when I enlarged the first one it took me out of the whole post so... just know I read this and looked at the pictures. But most importantly I am holding you all in prayer. xoxo

We are so thankful you arrived safely! May God protect all of you as you serve!

Love to all,
The Reams'


P.S. Could only find General Quackington in the picture with the balloon bears.

Love hearing about all the adventures God has for y'all in Mexico! The Duck is in the wall with Nate pondering life and in the bush with the pic of the wall and insulation. Love y'all and have fun! Love, Chris