Working from the Wonky Part I

We began bright and early with two crews heading to the work sites. One crew is working on Mr. Price's house, which we are rebuilding (as much as we can get to this week), and the other crew is working at Mr. Holloway's house putting up a fence. (Mr. Holloway is on the right in the second picture, and he is the 86 year old neighborhood handyman!)


This afternoon we visited United Christian Academy, begun last year by Jack Kennedy’s United Christian Ministries, a small private school here in Hattiesburg. According to the principal and science teacher, Callison Richardson, the school had 7 students in 2016-17, its first year and 14-16 students are expected in the fall of 2017. The students are all minority, range from grades 4 to 11, and must be teachable, respectful of authority, willing to work hard to learn, and open to learning about the God of the Bible. The UCA students did work hard last year and Callison says that most of the students improved in this first year by 2-3 grade levels.

Rachael Floyd, the English and Social Studies teacher, says that the students love UCA because it is where they are safe and quite at home. She says that when she asked her students what color they liked best, one asked her what she liked and she said, ”yellow.” The student responded, “That’s the one I like best too.” She asked about other favorites and the responses always parroted hers. “This is because knowing what you like is a luxury my students have never known.”

Today we helped the teachers get ready for tomorrow by moving furniture and finishing up some bulletin boards. We plan to meet the summer-school students tomorrow afternoon. 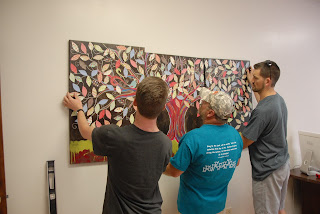 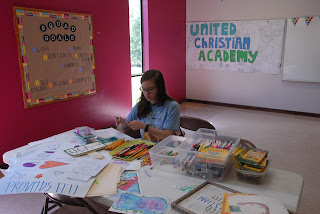 After supper we heard a presentation from Pastors Dwayne Higgason and Van Jones from Grace Temple. After the presentation we had a stimulating conversation about how Kingdom people are kindred people in Christ, no matter their culture or race.

Wow! You guys have got a lot on your plate for the week. Praying you are able to accomplish many things!!!
Sarah W

This looks rather challenging. I know there are some "demo" experts in the group. Hope your week goes very well.

Have you heard about the first baseball game in the Bible?

In the big inning. Eve stole first, Adam stole second. Cain struck out Abel. The Giants and the Angels were rained out.