It was a bright and early start for work this morning, as we stumbled out of our beds earlier than usual to continue work on Miss Carrie's house. An unnamed team member's phone was a half hour ahead, so he woke up his son Nathan telling him that he had overslept and needed to hurry and get ready. When the smoke cleared, Nathan was left unamused. The cool of the early morning was a delightful reward for the early start, but it only lasted for a short while when the heat and humidity rose with the sun.  Shirts soaked, legs bruised, and pants filled with extra holes, the team continued to work hard on removing shingles, nails, and tar paper.  By midmorning, Mike and Ron had finished placing extra trusses in a soft spot under the roof, so half of the team sauntered over to
Ebeneezer Missionary Baptist Church to use their facilities.  It was at this point that disaster
struck,
unbeknownst to the rest of the team!  Evidently, sometime after some of the team left, part of the drywall ceiling above Miss Carrie's bedroom gave way leaving drywall, insulation, and debris littering her living quarters.  This was the location of where the new trusses had been hammered into the frame above the drywall.  The vibrations of the hammering must have been the straw that broke the camel's back, causing the rotten drywall to collapse.  After much discussion, the decision was made that Hope for Hattiesburg will call in a drywall specialist to repair her ceiling, and we will not work on fixing that issue this week.  With the aid of a shop vac, we began cleaning up the debris in her house.  However, the filter on the shop vac was non-existent, so as insulation and drywall were sucked in, dust and little bits of insulation blew out the top like a confetti party.  We then resorted to a simple broom and dustpan to complete the job.  She has been 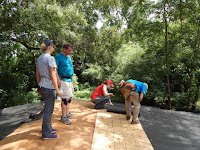 advised to sleep on the couch until the issue has been fixed, due to potential, unappreciated midnight awakenings to more rotten drywall deciding to let loose.  Near lunch time, Knox (our fearless Hattiesburg leader) decided that we would come back to work on the roof in the afternoon instead of working with the kids.  Though it was a tough decision to make, we were able to finish laying tar paper on the roof to prevent any other leakages from unexpected summer storms.  Also, shingles will be delivered bright and early in the morning!  Due to the extra half-a-day of work, we are now ready to begin with the shingling in the morning! 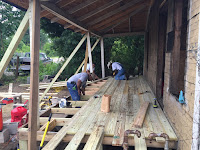 At Mr. Price's house, the decking on the porch was set.  Thanks to the experience of Lisa, she helped make sure the men got their boards flushed, and kept the porch in line!

At dinner, a third of the team tried pecan pie for the first time. It was homemade, and it peCAN'T get better than that! Afterwards, Ginger and Nathan (or would it be Nathan and Ginger?) played Game 4 of their fight-to-the-death game of HORSE. Ginger matched Nathan's behind the backboard shot with finesse, Nathan finally broke his cold streak and sunk a 3-pointer (to which Ginger responded with a perfect swish), and it was a classic battle of big man versus sharpshooter. As it came down to the last letter, Nathan won as Ginger failed to match his free throw in true N.C. State fashion. The series is tied 2-2. Get your popcorn, locate your children, and paint your face, Game 5 is tomorrow.

Tomorrow morning will be an even earlier start, as the men of the team need to be at Miss Carrie's house by 7 to arrange the packs of shingles on the roof when they arrive.  Please be praying for rest for all team members, safety on the worksites, and for the life-skills lessons to go well tomorrow.  It has been wonderful how the kids have opened up and have asked for advice on life matters such as relationships and mentorship from adults!

Here is your obligatory missionary joke:

A missionary was in the Negev Desert in Israel and came upon a casket containing a mummy. After examining it, he called the curator of the Israel museum in Jerusalem. "I've just discovered a 3000-year old mummy of a man who died of heart failure! the excited missionary exclaimed." The curator replied, "Bring him in. We'll check it out."

A week later the curator called the missionary, "You were right about both the mummy's age and cause of death. How in the world did you know?" The missionary smugly replied, "Easy. There was a piece of paper in his hand that said '10,000 Shekels on Goliath."

Hi all,
I feel your sweat! (I can say that, the "fan" lady!). Where are your Chillows?
I am very proud of all of you. And delighted for me, because I have found the duck every day!

Jesus is the Light of the World. He is surely polishing shiny crowns for all of you to lay before him some day. Thank you for having His servant's heart.