Blood and Sweat, but No Tears! 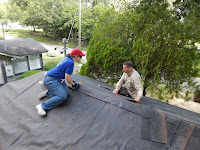 It was the best of times, it was the worst of times. Well, probably somewhere in the middle. For our last work day in Hattiesburg, Mississippi, we had a maximum overdrive roofing extravaganza to get the job finished and give the wonderful, lovely Miss Carrie a sturdy roof over her and her children's heads. We had fine help in the form of our new friends, Ben, Brad (who plays football and is going to be a US Marshall, so watch out), and the fearless leader of Hope for Hattiesburg, Knox. On the docket for the day was to finish shingling, cut shingles to be used at the peaks, trim the sides of the roof, and do more work on Mr. Price's porch. 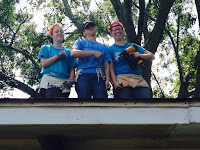 However, God in his infinite wisdom decided to throw a curve ball at us this morning.  When we arrived at the work site we found a wet roof with several strips of tar paper rolled up by the wind. It was discouraging to say the least, but this isn't a team that stays down for long. After a couple minutes of planning we got right up there and took care of business (virtual high five!). Fortunately, the cool of the morning and shade from the tree overhanging the roof made the morning work bearable. Knowing that the sun would made one side of the roof much hotter when we got back from lunch, Gwen had the genius idea to focus most of our workers onto that side, so later we would just have to work on the shady side after lunch. 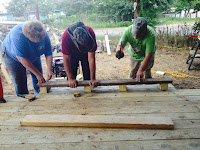 At Mr. Price's house, the team (Mike L, Mike J, and Lisa) was able to finish the porch!  His house now has a completed porch with steps, and he can't wait for the day when he can 'sit on his porch and yell at people in the streets.'  First Pres will be working on the house more in October during their annual week of Hope for Hattiesburg work.

After a short lunch break back at First Pres. (Where Nathan finally agreed to have a second sandwich, justifying it by saying "Treat yo self!"), we got back to work for the final stretch. We couldn't have done it without such a great, cohesive team, always willing to take on a new task and working together to create efficient methods of getting everything we needed done. Ashley was bouncing around everywhere, Gwen was hammering nails like a pro (roofing nails and fingernails), Ginger and Megan were cutting shingles until their hands went numb, and Ron was all over the place making sure everything was being done properly. The Lord was good and kept a storm that was headed our way from becoming an obstacle, and around 6:30 we were finally finished. After pictures on the roof and with Mrs. Carson, we headed back to the church for hearty feast.

Let me break down this hearty feast for you. We had vegetarian lasagna, we had beef lasagna, we had special cheese lasagna. In case that wasn't enough (which it was, but roll with me here), we had two kinds of salad, our usual ensemble of beverages. an apple bundt cake that this blogger isn't sure how to describe because they didn't try it. The icing on the cake was the power play of bread waiting for us in the dining room, varying from plain, to buttered, to garlicky and buttery bread (which we ravaged like a pack of wolves). Dinner somewhat resembled the seven dwarves sharing a meal after a long day in the mines, but in this case, everybody was either Sleepy or Grumpy.

Following dinner, Nathan and Ginger played a double header to complete their 7 games series.  Game 1, Ginger hits several in a row, and almost completes a sweep, but Nathan tries to pull a comeback to no avail.   Series tied, and it comes down to game 7!  Who would it be?  The showboater or the sharpshooter?  Game 7, the crowd waited with anticipation as Nathan hits the first shot. Ginger falls behind by 1, but then swishes her next shots in!  Nathan pushes for a comeback, but can he pull it out?  No!  Ginger definitively swishes in her signature shot, the Udder-Destroyer, and Nathan collapses to the ground as his attempt at the shot rims off with a sharp clang!  The sharpshooter wins the series, and the bragging rights to go with it!  Maybe next time, Nathan, maybe next time...

After the game, everybody got a much deserved shower, and then we packed up our stuff to load the vans.  The plan is to leave early tomorrow, to hopefully arrive back in Raleigh around 10 pm.  God has done amazing things this week, and we are so blessed to have been allowed to take part in it.  Please be praying that God will continue to be working in this community, that he will give the Hope for Hattiesburg and First Pres leaders guidance, that he will do a mighty work through First Pres and Ebeneezer Baptist's partnership, and that he will give our team a safe trip home.  We look forward to seeing family and friends when we return, and we can't wait to tell you more about our week at our annual post-mission trip report at a date soon to be determined.

(General Quackington was glad to have upped his game, yesterday.  Can you find him one more time?)