We have reached our next to last night! VBS ended today, and tomorrow we will spend doing construction all day long. Construction went well today as the people cleaning up at the “Putrid Pond” are hopefully finished for the week (for the sake of us all!). Michael earned a star for the day, as he balanced on trash in the pond to reach normally unreachable pieces of debris. We have learned that the pond will be completely filled in, so it does not need to be spotless by the time we leave. There was a glitch as they were trying to dump their last load of trash (out of 5 loads). They were told that they could not continue dumping trash on the side of the road because the city was supposedly no longer picking it up. As of right now, the load has not been dumped, and it is top priority to find out where to dump the trash tomorrow. Just an 125 meters away (an estimate by Dr. Larsen), prep work for siding continued. All lines have been marked, and some siding has been placed. Hopefully, most of the siding can be finished tomorrow. Mud was also removed from the top of the footers for the porch and dirt in front of the house was leveled. Also, Ginger and Emily (S), helped Bert (the home owner, father of the daughter living in the house) build the frame for the walls of the garage, which was a lot of fun. At the other house Mike J. worked on scaffolding to put up siding on the back of the house, and almost completed that entire side. He also had to use his creative juices to fix mistakes from the person who began the siding before him. Megan, Daniel, Marilee, and Ron worked hard to install insulation in a crawlspace (similar to what the other house did earlier this week). The plumber finished today, and they can hopefully finish insulation tomorrow.

Framing for the garage and cleaning up at the "Putrid Pond" 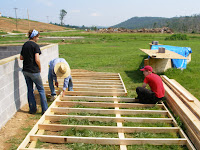 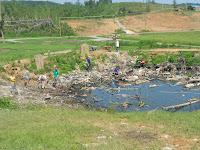 VBS ended with a bang today, and we felt that the kids learned a lot and had a good time. Today they set off their rockets, learned about critters in the creek, put all of their photos into their books, and learned about Jesus being the light of the world (John 8:12). The kids were all thrilled with how high their rockets flew, and will probably have lots of fun with them at home. In the creek they found many interest creatures including blue gill, tad poles, and diving beetles. Our new best friends at Walmart astounded us as they had 21 cameras developed in 2 hours! The photo booklets turned out wonderfully, and the kids enjoyed piecing them together. Kristin, Ashley, Leah (S), and all of the wranglers worked one-on-one with the kids to help them think about how God was visible through the pictures they had taken of nature and their friends. 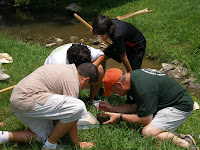 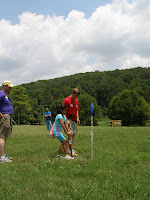 Critters in the creek and the rocket launch

At the end of the day, we were cooked a wonderful Mexican meal that was prepared for the families of the children who attended VBS. We all ate, fellowshipped, sang for the parents, and presented a slide show of what the kids did during the week. Carlos then preached on Jesus being the Resurrection as Tom translated. We have been blessed this week by the children and their parents, and we would love prayers for them as some are unchurched.

Tomorrow we hope to tell of many completed work projects, and perhaps not having to work by headlights to finish them. We have been amazed to see what God has done this week, and we can’t wait to tell everyone about it.

So glad things have been going so well! We miss you and pray for a safe trip home tomorrow.